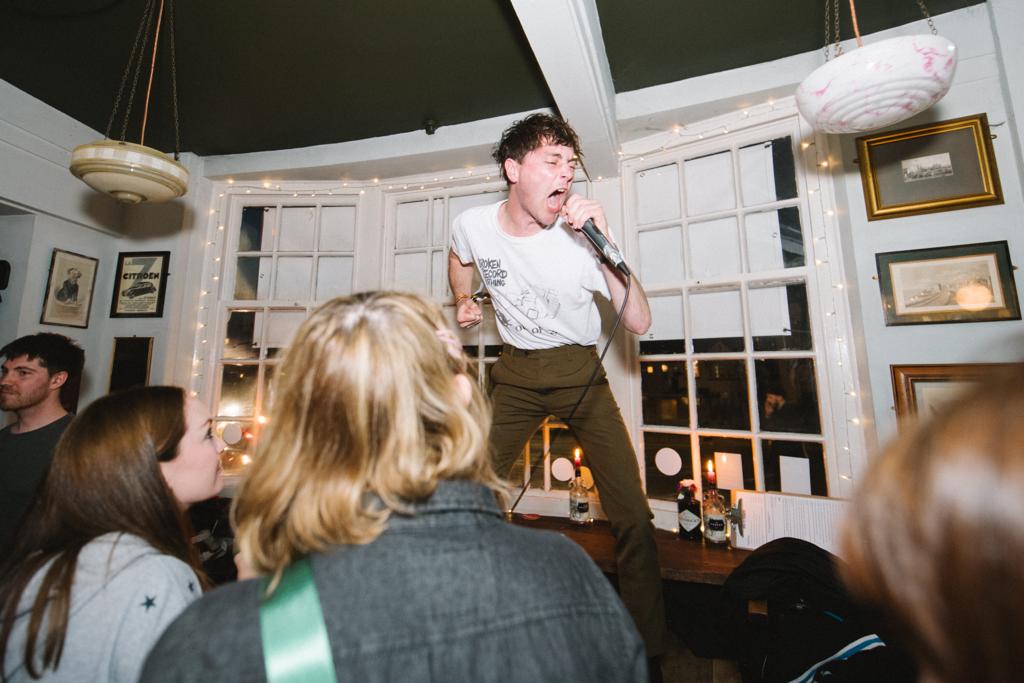 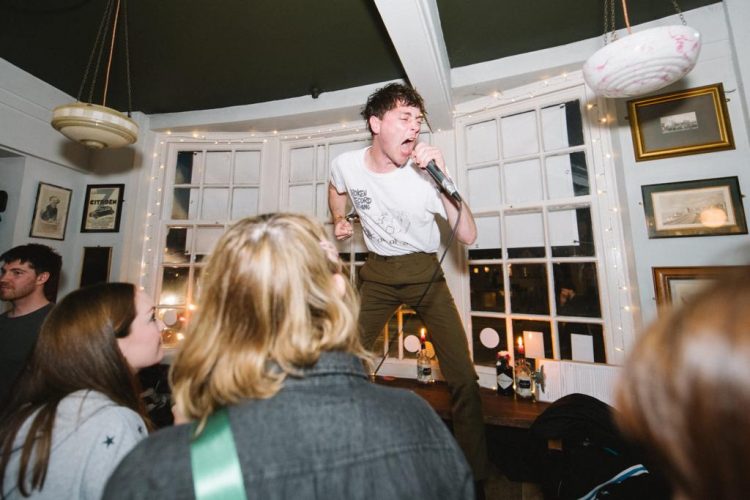 We come to the last day of our weekend hiatus tucked away in Brighton, down by the sea. So many great artists all in one weekend, in one of many incredible venues, as the scene changes every couple of hours and the artists bring different hues and ideas. Today we are greeted by Mark Hex, pink guitar in hand, combined with backing tapes he makes soundscape for tales of Glasgow plucked from real life.

Suns Up take us to a sunnier district, as passing clouds fill with pastel colours, while The Novus from Birmingham follow with slightly edgier mood, lead singer Tom Rhodes could have stepped out of a Tim Burton movie, legs flailing, silly hair and lashings of eyeliner, wearing a suit reminiscent of Edward Scissorhands. Their electronic guitars blend with acoustic, bringing a glistening gleam to the darkness. As we drift further down-stream, we move into heavier terrain with Jekyll, into a world of gothic fantasy, as we float through the existential waterways of life and diving back into high impact sonics of synth rock with I Am Lono reminiscent of OMD or Joy Division. Other bands to watch from this weekend includes Them Things, psych rock complete with hazy atmospherics and the memorable musings of frontman Louis Adams sensitive, beckoning and arresting.

Hot Sauce Pony bounce into action, with Caroline Gilchrist’s vocals pulsing off the walls, as they spiral into the sky as far as the steeple will allow, words depicting social documentaries and situationist happenings. While Micko and The Mellotronics follow, their wonderfully crafted stories bursting to come out, reminiscent of Hugh Cornwell’s spiky song-writing, yet somehow calling for a more honed-in vocalisation to get the message across. The Mantras join us from Brighton, with their own mod influences and psychedelics, pulling a massive crowd.

Today is starting to look like a bit of an away day for the South London artists. Ham Legion kicks-off tonight’s proceedings aglow with their prog punk energy and dissonant sound, pulling you into a dream-gaze state. Italia 90 offer a fresh dose of brutal honesty as the post punks tackle issues of democracy and the sophisticated branding of a modern elite. While Weakened Friends focus on the crazy and turbulent times of their twenties in friendship and love, as they untangle the pieces. A party thrown together by Pixies and Weezer might sound like this, sprightly and jagged with tightly wound guitars, a puzzle clunking seamlessly into place.

The weekend is filled with politics, from The Novus, Italia 90, Them Things, while the secret set tonight was from LIFE, the band, a show that is so politically defined, they read like a party-political broadcast. Art punk passion with a ferocious injection of pop, ironic dancing and clever lyrics combined. Mez jumps on the tables, the band members enthral as they create tension across the floor and move right out into the audience.

This sardonic take on life is meshed with a bright brit pop electricity that believes in a future. Mez Sanders-Green voices his opinion against the hate seekers and the Brexiters, he makes his case clear, there is lots that needs to change and similar to Idles their voice bursts out. He talks about the future being in the hands of the youth and his contempt of the Tories, as he aims to politicise and offer a voice to the disillusioned. ‘Popular Music’ brings the set to a boil, leaving an ecstatic audience as the room turns back to normal after a whirlwind of activity. Mez doesn’t just take the applause for himself, he sends it straight back and applauds the room in return, it is clear every person here is important to him as he racks up the tension, energising the crowd to do more, to believe more and to be more. They’ll be massive by this time next year.

Madonnatron cast us back to that experiential glow of glaring dream-gaze psychedelics that Ham Legion laid down just a couple of sets before. Post punk with a certain pop sensibility, where delightful shimmering vocals meet wonderous electronics. There is a contemplative, seductive and almost middle eastern feel to their music. Their carefully paced aesthetic, layering of sparkling guitars and call and response harmonies draw you into their coven. Imagine The Bangles meets Blondie on the highway and Silver Apples take over the wheel for a while as they drive off into the night, with an injection of riot grrrl action and echoing vocals, glowing out of the darkness.

It was great to see so many amazing bands this weekend, incredible diversity, aesthetics and sounds, sharing everything from personal experiences to energising politics. All under one roof, supporting each other and creating an atmosphere of inclusiveness all in one place. We saw some of the best most happening bands right now over the weekend in this intimate space, so we could hear the exquisite sounds and expression of each and every artist. Big thanks to all of them for making it a brilliant Three Days.