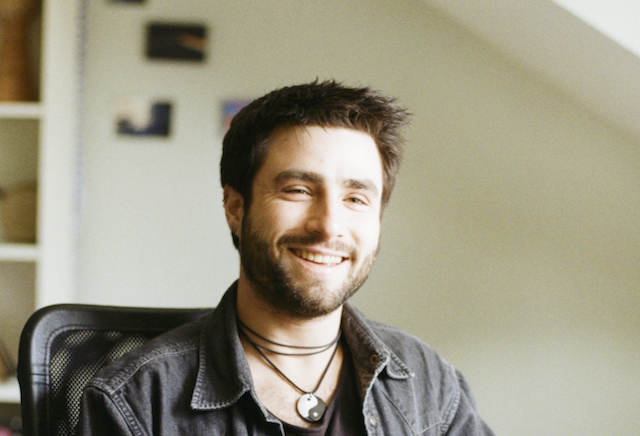 Breathing real life and true spontaneity into technology is probably the biggest challenge for any producer of electronic music, but it’s one that Max Burstyn has definitely got the knack of if ‘Sun-Spiral’ anything to go on.

Although the fully instrumental track has been sequenced and looped up using computer wizardry, there’s still something wonderfully human about it.  Burstyn, who is currently studying for a Master’s degree in Composition at the Royal Academy of Music in London, starts the tune with an initial burst of glistening, shiny arpeggio that can’t help but bring the work of minimalist legend Steve Reich to mind, as well as The Orb’s ‘Little Fluffy Clouds’ which sampled him.  You’ve got to love the way that he delivers such a technically demanding line by infusing it with a carefree nonchalance, sending in a second, equally restless line to play off and dance around the first and upping the energy levels bit by bit.  This guy can obviously string a tune – or several – together.

Some oozing, simple chords begin to full in the sound spectrum, bringing Detroit techno legend Carl Craig’s reworking of classical composer Manuel Gottsching’s ‘E2-E4’ to mind, and eliciting a similarly pleasant feeling of upwardly mobile euphoria.  In his press release, Burstyn declares that his musical vision revolves around combining Asian and Middle Eastern influences with electronic music, and while that’s apparent beneath the surface here, it doesn’t rely on cheap musical tricks or sampling to get that ethos across, but rather it’s all lurking in the notes and arrangement.

The cherry on the sonic cake is a fizzing, dayglo lead line performed, and we’re guessing here, on a Clavioline similar to the one that gave The Tornadoes’ ‘Telstar’ its unique sound, piercing its way through the mix with dynamism and creative electricity.  If that’s its strongest point, perhaps its weakest is the drums.  They do the job alright, and certainly the beat is hefty enough to get people on the dancefloor, but a little more variety and a few off kilter fills and surprises might bring a lot of reward.   But that’s only a minor quibble, because ‘Sun-Spiral’ is definitely an original and thoroughly invigorating listen all the same.