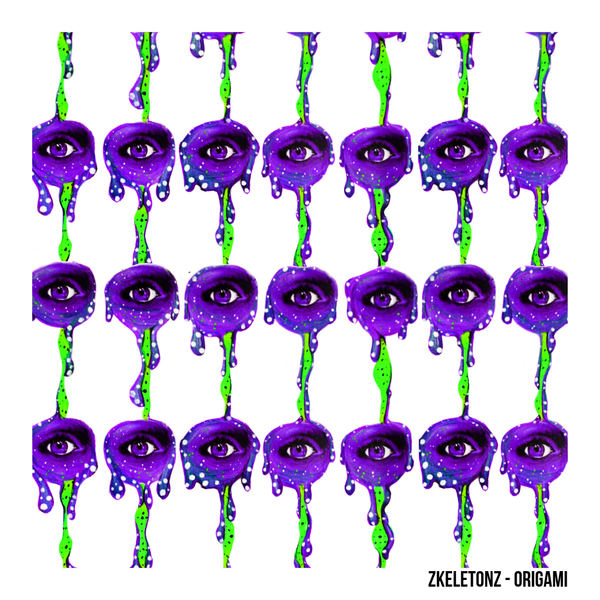 The pun-slinging comedian Tim Vine once observed that the advantages of origami are two-fold. Not unlike the twin plus points of ‘Origami’, the new single from Zkeletonz. On the one hand you, get the reserved, economic electronics of synthpop, albeit with a dash of Italo-house music piano plonking.

On the other, you get that which is not normally associated with the genre. No monosyllabic, dour lack of expression here. Rather, the lead singer of Zkeletonz, one Gav Venture, gives us a wonderful display of cock-sure attitude much closer to the traditions of rock ‘n’ roll than the more robotic machinations of electro and synthpop.

This, then must what they mean by ‘post-pop’. The trio of the aforementioned Venture and his two bandmates Will Taylor (guitar, keyboards) and Ed Trotsky (bass, beats) have created and claimed the genre as their own and placed themselves as its leading lights. Such self-assurance would normally be slightly suspect but when we discover the band have done over 100 gigs around their native East London (as well as further afield) and listen to ‘Origami’, then it quickly becomes clear that they can walk the walk like they talk the talk.

To us anyway, ‘post-pop’ seems to be a space where rock ‘n’ roll energy collides beautifully with the aesthetic style of electro and the sonic experimentation of dancer music. The result is something which takes from all three and then creates something familiar but original.

There’s so much to love about this, but here are a few things we can’t leave out. The intro, with its slowly unfolding synth sound, The way Venture sings: ‘Honestly baby / you had me at hello.’ The way the ecstasy-soaked piano line chugs into the chorus, not a million miles from the Happy Mondays once they had Paul Oakenfold at the production helm. The gorgoeus filtered breakdown, that could be Daft Punk at the height of their powers.

This, according to the press release, is music for fans of Everything Everything, Glass Animals, Pat Lok, The 1975, Jungle, Capital Cities and Haim. We would probably only want to add ‘anyone who has ever been on a dancefloor in the last 30 years’ to that list. Thumbs up.